Farmers across B.C. are snapping self-portraits and posting them to social media to protest proposed changes to the Agricultural Land Reserve.

The province wants to divided the protected land into two zones.

But Zone 2, which encompasses the North, the Kootenays and Interior B.C., will see rules relaxed to allow for more non-farming activities on the land.

Courtenay farmer Arzeena Hamir sparked the protest earlier this month with a hashtag #farmers4ALR and an angry ‘felfie’ – a “farmer selfie.”

“I got the ball rolling and it snowballed,” said Hamir, a former Richmond resident.

“Like many farmers across B.C., I was appalled when the legislation came through. There’s nothing in this legislation that supports farming. In fact, it tries to get farmers out of farming, which makes no sense.”

Hamir wanted to counter government statements that claimed farmers want changes to the ALR and support the new legislation.

“I wanted to show the face of a farmer who was not in support. I did it out of frustration,” said Hamir, who believes it’s important for farmers across the province to get involved, especially those in Metro Vancouver and the Fraser Valley, where land is under constant pressure from developers. 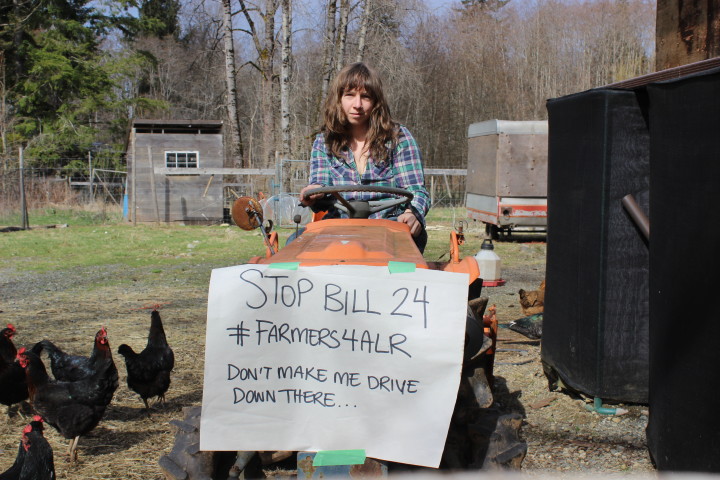 “This legislation is going to impact farming across B.C. Once you allow non-farm use in one area, developers with deep pockets will start purchasing land in other areas hoping they will eventually get it out.”

Hamir is a member of the Certified Organic Associations of B.C., the membership of which opposes Bill 24.

“We want to be consulted before changes are made,” Hamir added.

“This government needs to step back from this legislation and engage farmers.”

The ALR was created by the NDP in the early 1970s to protect the province’s farmland from industrial and urban development.

The province, however, believes the new system will make for better use of the land.

Under the new system the Agricultural Land Commission, which administers and regulates land in the reserve, will remain an independent body.

Pitt Meadows dairy farmer Bill Loveridge knows first-hand the pressures of development. His land lies along the route of the proposed North Lougheed Connector, a road through farmland, needed to service a yet-to-built mixed-use development in Pitt Meadows.

“I support the ALR,” said Loveridge, who worries that his land will come under more pressure as farmland around him loses protection.

“If the Pelton property goes, that scares me more than anything. I definitely want to keep this place green.”

The Pelton property is a former tree nursery in Maple Ridge, located along the Golden Ears Bridge connector road.

On Wednesday, newly appointed agriculture minister Norm Letnick acknowledged that opposition to the legislation from within the agriculture sector is causing him to revisit the government’s lack of consultation on it.

QUIZ: How much do you know about British Columbia?

On this B.C. Day long weekend, put your knowledge of our province to the test

Letter writer and taxpayer ashamed of quality of road maintenance, especially along Dewdney

Pilot and passenger have minor injuries

Michael Buble among 13 British Columbians to receive Order of B.C.

Restrictions on non-essential travel across the Canada-U.S. border have been in place since March 2`

App requires users to have Apple or Android phones made in the last five years, and a relatively new operating system

Stalock shuts down Vancouver in opener

Bandits down Niagara River Lions 70-57 on Sunday, improve to 3-2

Good Samaritans prevented the blaze from getting out of control