The owner of two pit bulls who were euthanized after attacking a neighbour’s cows in May is demanding an apology and an investigation from the City of Pitt Meadows.

Baldev Dhuga believes the city acted too quickly and did not give him a chance nor advise him of his right to appeal the decisions to put down his dogs.

Dhuga said his family misses the dogs, Tyson and Tia, and he has now made a formal request for an apology and inquiry in a letter sent by his lawyer to council.

The pit bulls were seized by the city on May 10, following a vicious attack on a cow and bull at a property off Lougheed Highway on May 8.

The dogs chased the cattle off the property and pursued them across the highway during rush-hour traffic.

The female pit bull stopped after getting hit by a car, but the male continued to hound the shorthorn heifers until they reached a cul-de-sac in the Morningside subdivision and darted to the safety of a backyard, off Park Road.

Neither dog was licensed, and the female was not spayed.

Dhuga doesn’t dispute his dogs attacked the cows, but doesn’t think they should have been killed. 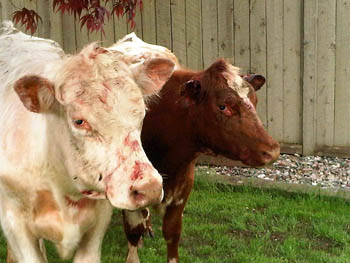 He reimbursed the man who owned the cows for their vet bills, which totaled $597.

Dhuga does not know what triggered Tyson, the six-year-old male pit bull, and Tia, an 11-month-old female, to attack the cattle, which sustained bites on their snouts and neck.

Both dogs were not aggressive and were companions to his children and grandkids, he said previously.

During the day, Dhuga added, the dogs spent time in his blueberry fields off Old Dewdney Trunk Road and were never aggressive to his farm staff. At night, the dogs kept thieves, who’d been stealing his farming equipment, off the property.

The letter from Dhuga’s lawyer notes the pit bulls had no previous history of attack, aggression or violence towards any people or animals.

The city’s bylaw officer, Leslie Elchuk, asked Dhuga to sign a piece of paper on May 10, authorizing her to take possession of the dogs.

Dhuga insists he was not advised of any right to appeal. He said he told Elchuk he wanted the dogs back and was willing to build a kennel to make sure they did not escape again.

The Dhuga family wants the city to conduct a formal inquiry into why the dogs were euthanized so quickly, although Elchuk told media she had “21 days” to decide whether to put them down.

At the very least, Dhuga wants an apology under the terms of the Apology Act, which allows for a mea culpa that is not admissible in court.

The city has yet to reply to Dhuga’s letter.

City director of operations Kim Grout has not seen the letter, as it was addressed to council.

She said the city’s animal control bylaw has no set time period that must elapse before an animal is euthanized. That decision is left up to the animal control officer, she explained.

Pitt Meadows Mayor Deb Walters has not seen the letter from Dhuga, either, but anticipates the matter will be discussed soon.

“I am confident that staff will bring it to council in due process for discussion and it will be dealt with at that time.”

Cycling catching on everywhere but Ridge

Sheba, 16, was reunited with her family

The coroners’ service is investigating