Policing isn’t just about law enforcement, it’s about human engagement. And in this stressful time of COVID-19, making connections with the people of Maple Ridge and Pitt Meadows is one of the most important parts of the job for every local Mountie.

Appearing hungry for human contact, he came close – but not too close – and shared a bit of his story with the superintendent.

He explained how his own elderly mother was in care and all he longed to do was give her a hug.

He went on to express his gratitude to the officers, thanking them for their service, and for still coming to work every day to ensure everyone in the community is safe – despite the health concerns.

The brief, but meaningful conversation stirred emotions for the officer in charge of the local police detachment.

“I think what was touching about it is that at the end of the day, we’re all human beings. And, we are police officers, and we were in uniform, but he was just wanting to humanly connect with someone,” and he found that with Hyland and a few fellow officers in the park that afternoon.

Every member on the local police force has a similar story or two to share, Hyland insisted. Sometimes it’s been a case of gratitude expressed in the form of a free coffee, the gift of baked goods, thank you cards, chalk art drawings on sidewalks and streets, hearts hung in the window, or simply a huge smile and wave, or verbal thank you.

RCMP Insp. Aaron Paradis recounted a touching encounter just the other day while on foot patrol in Memorial Peace Park.

A woman in a wheelchair, who was dealing with obvious physical struggles and limitations, took time to come near and lavish praise on Paradis and other Mounties for their service.

There are, admittedly, long-time officers who have gone most of their career without being thanked for what they do.

That, Hyland acknowledged, has changed in this new reality brought on by COVID.

“It’s palpable how different it is,” she said. “We’re still doing what we do every day, but it’s just a significantly different world…”

The public awareness of what first responders face on a daily basis, the risks that they take, are suddenly understood and being acknowledged, Hyland added.

“We’re so appreciative of how much appreciation has been shown for us… we don’t do this job to get thanks. That’s not why anyone signs up,” but the frequency and levels of gratitude have proven uplifting and empowering.

Though now, she admitted, their days are not all filled with these moments of kindness. And she’s not about to sugar coat the job.

Her officers are still out on the streets of Pitt Meadows and Maple Ridge and they’re still busy stopping and investigating crime.

RCMP are responding to many of the typical calls for service, such as break-ins, auto thefts, assaults, or thefts from cars.

They’re not seeing the same volume of traffic offences, crashes, shoplifting cases, or calls to businesses for disturbances, she said. But recent changes in lifestyle – forced by the virus – have spawned an influx of other calls.

While local police have been able to take part in the odd birthday party parade for a child or senior, most of their recent calls are more potentially serious in nature.

With COVID has come unprecedented layoffs, unemployment, and financial worries. With those added stresses in a family, and with most people abiding by the stay at home recommendations, Hyland said her team is seeing the number of domestic violence and mental health cases on the rise.

“Our police officers have amazing hearts and compassion, so we’re hearing calls for service are down – and in some respects that’s true – but the complexity and the importance of what we’re going to has actually increased during this time,” Hyland said.

Consequently, she said, officers are endeavouring to take more time to help defuse volatile situations and to get people help.

COVID is presenting some new and different realities for local officers, but Hyland said she’s grateful that none of her team have been diagnosed with COVID, the community seems to be coping well – for the most part – and she is looking to a time in the near future when the pandemic will be under control and life – “as we know it” – will return to some form of normal.

Looking at the motto of her detachment, “One team stronger together” she’s realizing more and more that this applies to not only her team (just shy of 200 with full-time officers, municipal staff, and auxiliary and on-call members), but the community as a whole.

“There will be a time when we can come back together again” as a community, and she’s confident Maple Ridge and Pitt Meadows will be stronger for what they’ve experienced.

• If there is more to this story, please let us know about it. Email us at editor@mapleridgenews.com. We look forward to hearing from you. In the meantime, like us on Facebook or follow us on Twitter. 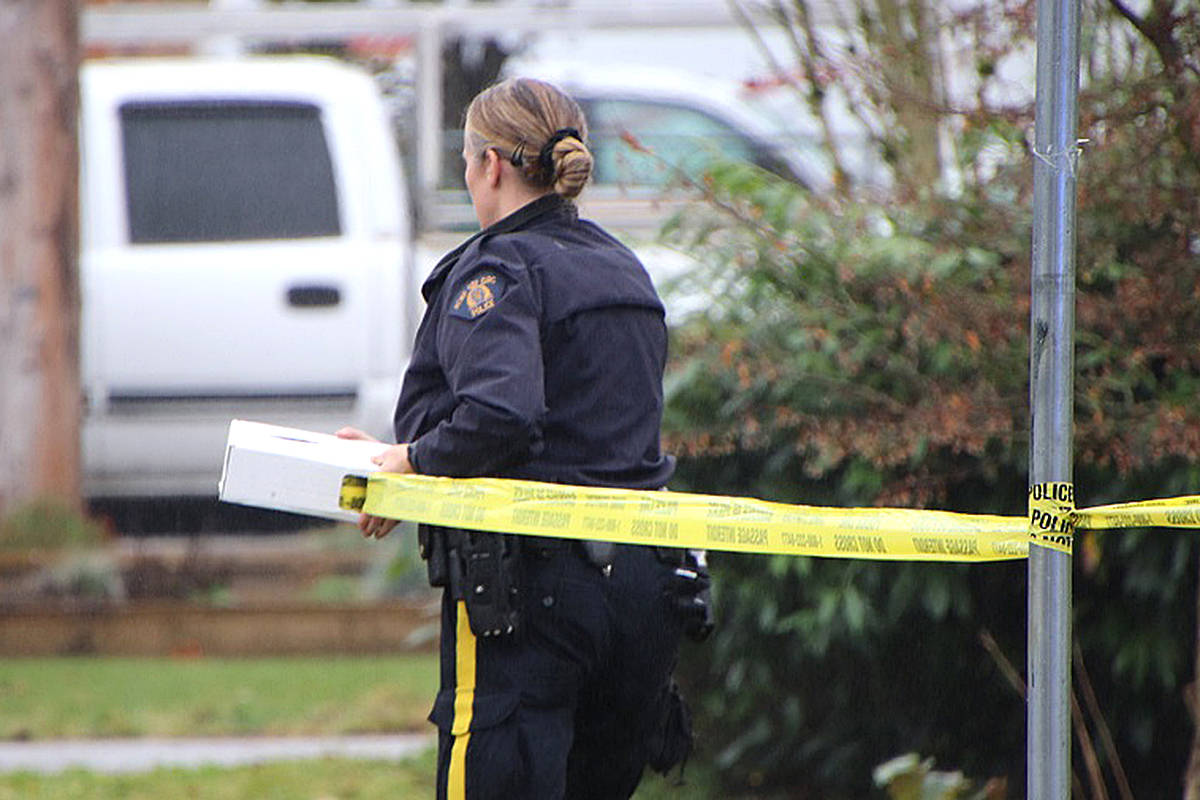 Even amid the coronavirus pandemic, Ridge Meadows RCMP are still active in our community, enforcing the laws and responding to calls – as they do every day. (Special to The News)