While neighbours in Silver Valley are tired of seeing bears shot, the Conservation Officer Service won’t be following a “no-kill” policy for the area.

The Ministry of Ministry of Environment and Climate Change Strategy said Thursday that it doesn’t follow a no-kill policy anywhere in B.C. and that it assesses and responds, “based on the level of conflict and risk to public safety in each case.”

Two weeks ago, the B.C. Conservation Officer Service shot and killed three bears in the Silver Valley suburb, in north Maple Ridge. Another bear was shot, but escaped into the forest.

Susan Zanders, a Silver Valley resident, said last week that residents are concerned and stressed by the number of bear incidents and want to turn their neighbourhood into a “no-kill” area. One of the goals is to launch their own WildSafeBC program.

However, by accepting that they live in a wildlife-rich area on the edge of a forest, residents can reduce the number of human-wildlife conflicts, said Sgt. Todd Hunter.

“If you look at Silver Valley from a distance, the average person would say – that’s in bear country,” Hunter said Monday.

“The way the community was designed was not in mind of preventing conflicts, bottom line.”

As a result, attractants have to be managed more heavily and residents have to more cognizant than the average resident of the city, he added.

The suburb is surrounded by mountains, forests, berry fields and bogs, and is laced with wildlife corridors, connected back yards that allow animals to pass freely and lots of green space for hiding placees.

Everything from garbage to barbecues, fruit trees and bird feeders have to be controlled to minimize catching the nose of animals constantly parading through.

Hunter stressed that such measures have to be done at all times of the year.

Conservation officers are also still trying to locate a bear in Silver Valley that’s bold enough to traipse up people’s driveways and go into their garages.

“It’s habituated to the area,” and used to eating garbage, Hunter said.

WildSafeBC coordinator Dan Mikolay said that most Silver Valley residents are only putting out their trash the day that that garbage is due to be collected.

However, he added that it’s just a natural area that attracts bears, adding that once the berries are out, the number of bear sightings should drop.

Maple Ridge isn’t yet a Bear Smart Community, which means it hasn’t taken all possible steps to deter bears.

The city offers subsidized bear-resistant garbage containers, but doesn’t require residents to use them.

• Members of the public are encouraged to report any wildlife sighting to the Report all Poachers And Polluters (RAPP) line at 1-877-952-7277. 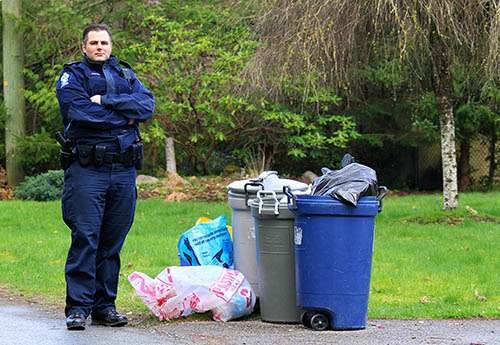 Malaysia to send back plastic waste to foreign nations

2 men get prison for slain sheep ‘performance’ at Auschwitz