People are getting out of their cars and piling on to buses and trains in record numbers, with a good part of that increase originating in Maple Ridge and Pitt Meadows, says TransLink.

TransLink said there were 39.6 million boardings throughout the entire transit system in October. That number finally exceeded the previous high in February 2010, when there were 39.2 million transit trips as people attended the 2010 Winter Olympics.

When it comes to the West Coast Express commuter rail service that runs part-time between Mission and Vancouver, there was a total of 240,000 boardings in October, a 13-per-cent increase from October 2017.

As well, the Mission City station saw an increase of five per cent, while Port Moody station ridership jumped 12 per cent.

“It’s great to see this kind of ridership growth, one sign that customers are responding to better transit service right across the region,” TransLink chief administrator Kevin Desmond said.

The increases are continuing a trend that started last year, when there was a total of 407 million boardings, a six-per-cent increase from the year before.

That increase is the largest of any city in Canada or the U.S., TransLink said.

Maple Ridge will see another transit improvement a year from now when the B-Line bus service connects Haney Place Mall to Coquitlam Central SkyTrain station. That will offer 40-minute service to Coquitlam every 10 minutes during rush hours.

Bus stops at Laity and 203rd streets are currently being planned for the B-Line service, which will run along Lougheed Highway.

The Ministry of Highways and Infrastructure announced last week that more streets lights will be installed next year along Lougheed, between Laity and 220th streets, at a cost of $1.4 million.

The stretch is poorly lit and the site of many traffic accidents in the last few years.

The new street lights will all be LEDs, similar to what now lights Lougheed Highway on Telosky Hill, west of Kanaka Way.

The ministry said it will coordinate its street light installation, with the City of Maple Ridge and TransLink, as both plan out the B-Line bus stops.

The Expo/Millennium SkyTrain line had a total of 10 million boardings this October, an eight-per-cent increase from October 2017. 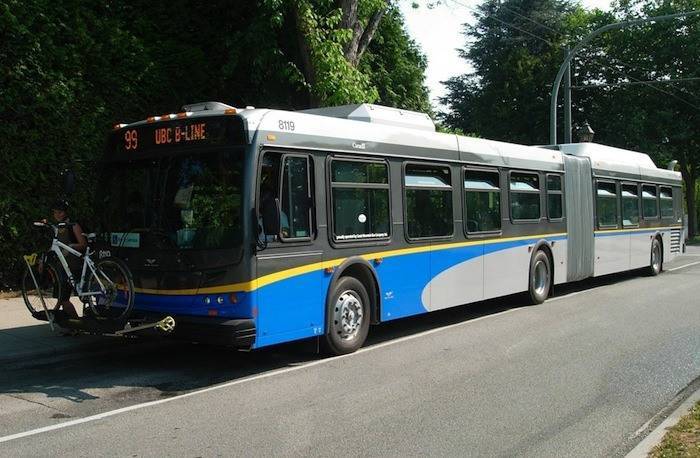 B-Line is supposed to be running a year from now in Maple Ridge. (THE NEWS/files)

B.C. First Nations are owed massive debts after fighting to save homes from wildfires