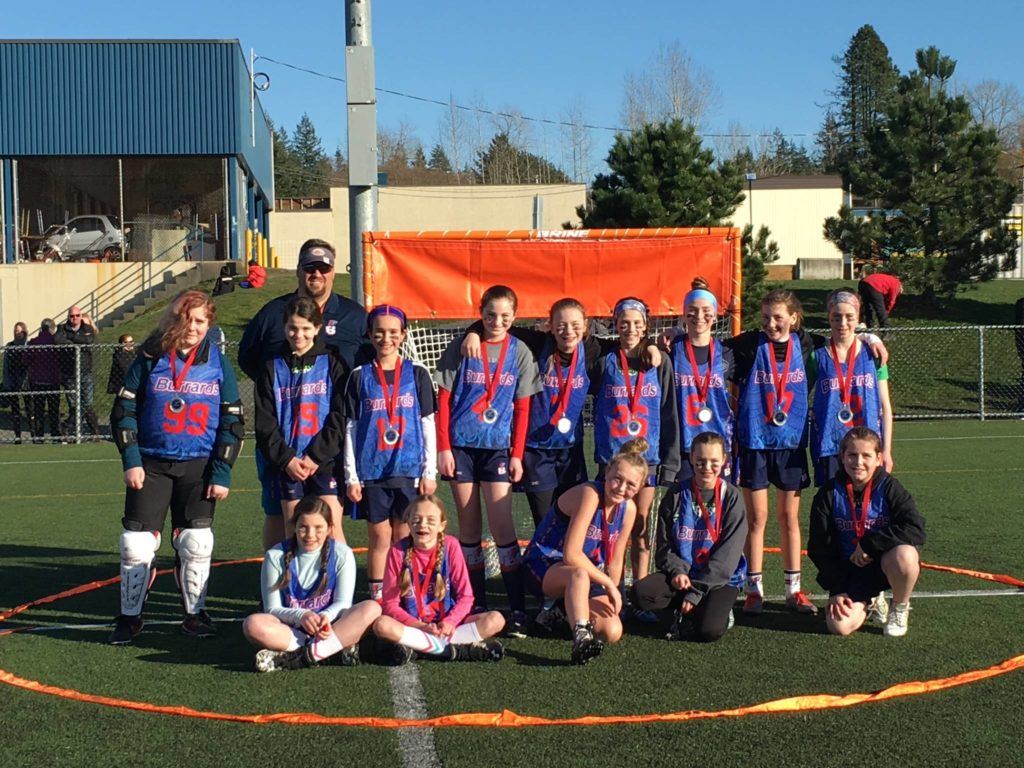 The u-12 girls earned silver at provincials. (Contributed)

The Ridge Meadows Burrards won the Tier 1 boys’ under-15 field B.C. field lacrosse championship on the weekend, and the association earned medals in two others divisions.

Ridge fell 6-5 to Port Coquitlam in the u-12 final, while the Burrards deowned Burnaby to earn u-15 bronze.

The Burrards defeated the Coquitlam Adanacs 7-6 to win gold in Tier 1 boys’ u-15 final.

Ridge finished second in round-robin play, defeating Langley 12-5, Pacific Rim 14-5, Port Coquitlam 11-8 and Victoria 9-2. The Burrards only loss was in the round-robin to Coquitlam, 6-4.

“Coming in to the finals, we knew that we were a different team than the four previous times we had met against Coquitlam,” said Burrards coach Brad Rennie.

“We knew there was something different that day. The demeanor of the team was loose, lots of laughter and some a couple nerves as expected. Our boys played came out and played a complete team game, superb defense and patient, yet aggressive offense.”

He said the team made excellent choices in possessing the ball and striking when the time was right.

“Most of all they wanted it for each other, ‘20 strong.’ All the hard work at practices, running hills at dryland and time spent bonding were coming together at the end of the year,” Rennie added.

“We had 20 heroes that day and no one could take that away from them. When it was all said and done, the accumulation of all the time spent, effort, sweat, injuries all made sense as you watched a 200-foot-long stream of gear tossed across the field with a scrum of guys embracing each other as equals, teammates, friends and, most of all, family.”

Rennie said the improvement from each player, from the start of the season to the end, was outstanding.

“We finished second place in the Seattle tournament to a full-time lacrosse academy. From that point, I think we knew where we had the potential to be at the end of the year. We finished the season in second with a record of 13-3, with all three losses coming to Coquitlam.”

Ridge’s Sawyer Morais was selected MVP of the Tier 1 boys’ u-15 division, while Lily Ferguson of the Burrards earned the same award in Tier 1 girls’ u-15 .

The u-18 Ridge boys finished fourth, falling to Victoria in the bronze-medal game.

The B.C. girls’ finals were held Feb. 9-12 at Willoughby Park in Langley.